The Infinite Moment of Us

Wren Gray has worked hard her whole life to please her parents. Now a high school graduate, she is torn between following her parents’ wishes and dreams of her own. Charlie Parker, Wren’s classmate and her secret crush, has led a troubled life, but he knows one thing. He has loved Wren from the moment he first saw her. When Wren reveals that her future plans don’t involve college, her parents are hurt and angry and she finds solace in Charlie’s love and gentle ways. Charlie is dealing with his own struggles, like letting go of years of pain from growing up in the foster system and an ex-girlfriend who won’t let him go. Wren, Charlie and their friends have a summer to remember and learn that sometimes getting what you want in life takes courage, determination, and letting go of the past.

Readers will easily identify with Wren, Charlie and their friends as they transition from high school to the real world. This is a smart, coming of age story from an author who knows her audience and understands teenagers. Myracle addresses the sexual content in this book with an honest, heartfelt letter, and her attempt to “capture something genuine of love” in this novel works. 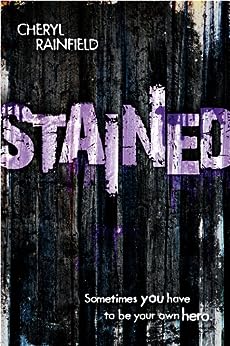 Seventeen-year-old Sarah Meadows just wants to blend in, but no matter how she tries, her port-wine stain birthmark sets her apart from other students, making her a target for ridicule and bullying. She wishes she was beautiful, like the girls in magazine ads, or at least immune to the pain others cause her, like Diamond, the comic book superhero Sarah created whose skin is hard enough to protect her against anything. When Sarah is kidnapped and her life is at stake, blending in is the last thing on her mind. She needs help and must rely on her own wits and determination to be rescued.

Rainfield tells a gripping story of strength and survival, tailor-made for YA audiences. Sarah’s heart-wrenching first person narrative alternates with her friend Nick’s perspective, giving the heroine even greater depth. Rainfield’s characters are poignantly human and will stick with audiences long after their ordeal is over. 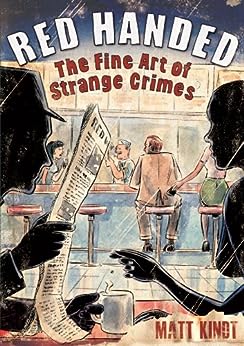 The town of Wheel Barrow experiences a rash of unusual crimes.  There’s a thief who steals chairs and another who takes street signs. There’s a repair man who photographs people in their most vulnerable moments, and a man who cuts up priceless pieces of art and sells them off in pieces.  The list goes on, but for star Detective Gould, no case is unsolvable, and he garners fame and accolades in the local paper for his crime solving prowess. In an unexpected twist, Gould finds himself entangled in a revenge scheme that forces him to question what the nature of crime and perception mean.

Kindt’s book is a multi-layered graphic novel that incorporates hazy watercolor images, newspaper clippings, and paperback book covers to deliver a detective story laced with existential philosophical reflection. The cryptic connections between crime vignettes offer readers a foray into their own detective work as they make their way through the fragmented stories resulting in a satisfying and cerebral reading experience.

Sixteen-year-old Janine is the sole survivor of a suicide bombing that took her parents among many others. The novel is set during the ten year anniversary of the tragic event. Janine has always made every effort to avoid the press that has depicted her as a symbol of hope. As Janine gets caught up in a chain of unstoppable events that begin with another near-death experience, it seems that she can no longer avoid the media. While Janine does face the typical teenage worries concerning friendship, family, dating, and getting into the college of her choice, she also faces much larger choices concerning faith, trust, and possibilities.

Aronson has created an interesting character that leaves the reader questioning the role of media, the power of religion, and what goes into making a successful decision. Believe is packed with exciting and out-of-the-ordinary events that move the story along quickly. Janine and the image of her wounded hands is a character that readers won’t soon forget.

When We Wuz Famous

Francisco Ortiz has an incredible opportunity. His grades and athletic abilities have opened the door for him to enroll in a prestigous residential private school in upstate New York. The ripple effects that his departure has on his friends and family in Spanish Harlem are seen through the eyes of his girlfriend Reignbow and his lifelong best friend Vincent. Vincent’s has been abandoned by loved ones again and again and when Francisco leaves, Vincent begins a long series of impulsive bad decisions. Francisco’s attempts to save his friend may cause him to become the gangbanger that his upper-class schoolmates assume he is.

Takoudes created an award-winning independent film (Up with Me) in collaboration with teens in Spanish Harlem and then recast the story into novel form in this, his first book. The narrative voice in the first chapter is captivating, and both dialogue and character actions seem authentic and honest. The events of the novel are framed by an interview between a police detective and Reignbow about a murder which involves Vincent and Francisco in some capacity, and the entire heart-breaking story is haunted by a sense of inevitable tragedy. 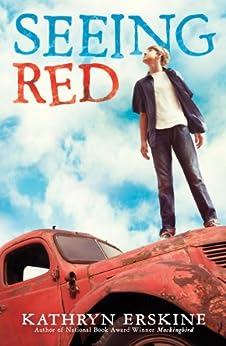 Teenager Red Porter lives in a 1970’s Virginia town that is struggling with the idea of desegregation. After his father’s death, Red uncovers a dark spot in his family’s history that he is determined to amend. He is thrown into a world of confusion, including a frightening encounter with his best friend, Thomas, and a transitioning relationship with his neighbor, Rosie. While trying to save his family’s land from being sold, Red learns to trust his own reasoning rather than the opinions of society.

Erskine creates an in-depth coming of age story in Seeing Red. Red’s emotional struggle with all of the issues in his life—loss, racism, a changing world—are portrayed realistically yet descriptively enough to make readers feel as though they are submerged in 1970’s Virginia. Red has flaws like any teenage boy, yet encounters grown up, dangerous events as well. Seeing Red is a boy’s twist on Harper Lee’s To Kill a Mockingbird.

The Kingdom of Little Wounds

When palace seamstress Ava Bingen accidentally pricks the flesh of Queen Isabel of Skyggehavn, Ava’s life and that of the mysterious mute nursemaid, Midi Sorte, are suddenly brought together in a series of events that will alter history. Both must deal with a despicable Count who has eyes on the throne, a Queen who seems to be sinking into madness, a terrible disease that is killing the heirs to the throne one by one, and the palace historian, who may love both girls in a way neither completely understands.

Using carefully researched details about the spread of syphilis in the Middle Ages, Cokal crafts a complex tale of love and loss, deception and absolution, friendship and forgiveness. Through writing that is beautiful and graphic in description, the author shares a sumptuous fairy tale for the most mature young adult readers. 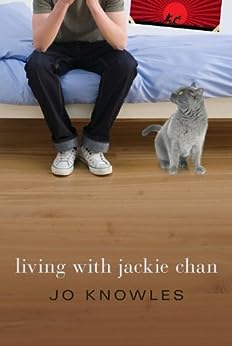 Josh, a high school senior, wants to forget all about life-changing events that took place during his junior year. In an effort to leave his past behind, Josh must do the unthinkable, transfer to a high school four hours away. He moves in with his free-spirited karate instructor, Jackie Chan-obsessed Uncle Larry and learns that actions have consequences. With Uncle Larry’s gentle guidance, including the use of powerful karate precepts, Josh is able to work through his emotional turmoil.

In her companion to Jumping off Swings, Knowles provides readers with a compelling story that includes well-developed characters while taking a hard look at a family in crisis. The ripple effect of our actions is evident, as is our undeniable need for love, acceptance, and forgiveness; most importantly the forgiveness we all too often struggle to give ourselves.