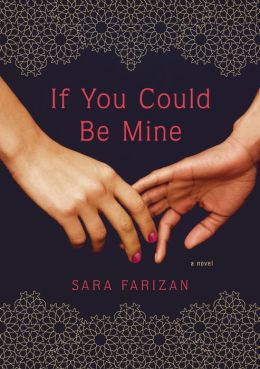 Love has been more of a curse than a blessing for seventeen-year-old Sahar. From the age of six, she has been hopelessly in love with her best friend, Nasarin. She dreams of one day having the freedom to expose their love, marry, and grow old together, but life in Iran makes this dream an impossibility. Exposure could mean prison, torture, or death. When Nasarin’s family announces her engagement to Rez, a wealthy doctor, Sahar feels as though her entire world has come crashing down around her. Sahar knows she must do something to stop the marriage, even if it means losing her true self in the process.

Farizan’s debut novel will tug at your heart and open your eyes to the perils of forbidden love. Readers will find themselves immersed in the purity of Sahar’s love and utter desperation as she clings to any sense of hope for a future with Nasarin. An assortment of beautifully detailed characters and an intricately woven plot line will provide insight into the complexities of friendship, family, loss, and young love. 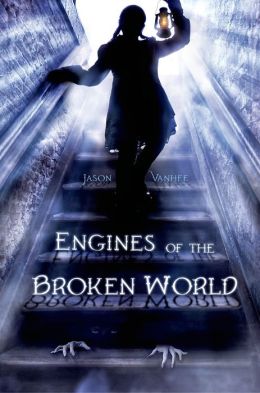 Merciful Truth and her brother Gospel are the last children left in the world, surrounded by their not quite dead mother, a small animal-form called a Minister, and the ever encroaching fog that signals the end of the world. The bodies of their mother and a neighbor seem to be possessed by disturbing and elusive beings from an earlier time. Mercie and Gospel, tough as they are, are the innocents, trying desperately to survive while their world closes in on them. Who can they trust in order to try save their world, and can it be saved at all?

With spiritual overtones, this horror story presents a dystopian world suffering from the wrath of God, where the issues of religion and free will and good and evil all collide in a somewhat confusing manner. Although Mercie and Gospel seem to have choices, the dark mood makes their actions feel increasingly fatalistic and powerless. What Vanhee does particularly well, though, is create a chilling atmosphere as he unfolds black, white, and grey images of snow, fog, and a barren house where almost all of the action takes place. Mercie’s engaging voice is the light that carries us through the story. 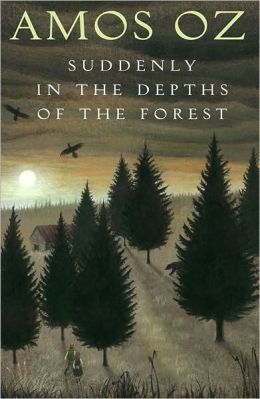 The village in which young Matti and Maya live is constantly shrouded in mystery that can be answered by one simple question: where have all the animals gone? The children learn bits and pieces about what animals looked and sounded like from their strange and lonely teacher. Other unseemly older villagers tell of the night when all of the animals were abducted and taken to a mountaintop. To most children, animals make up the fictional creatures of legend and lore, and to believe anything otherwise is cause for swift and relentless mockery. It is not until Matti and Maya stumble upon a secret that they decide to start on their own journey to search for the animals they have only been able to hear about from the stories of their elders.

Oz has written an inspired fable that uses many of the elements of the oral tradition while incorporating the modern-day theme of bullying. Suddenly is a quick read, full of substance, and young adults will enjoy Matti and Maya’s travels into the unknown in search of answers to the mysteries of the creatures that once roamed their village. 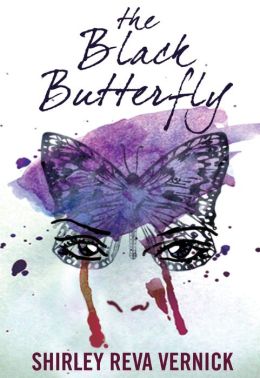 Penny’s mother is a self-proclaimed ghost hunter who often leaves Penny behind while she investigates potential haunted properties. This time, Penny is forced to spend the Christmas holidays at the Black Butterfly, old inn on the coast of Maine, with a family friend who hasn’t spoken to Penny’s mother for over 15 years. Lonely and feeling abandoned, Penny finds comfort in the hotel kitchen as Bubbles the cook shares exquisite dishes and culinary techniques with her. While trying to uncover reasons for the lack of communication between her mother and her mother’s friend, Penny steps into second mystery involving a friendly ghost, a vindictive ghost, and a handsome, nice, eligible guy.

Aspiring foodies will savor Vernick’s ghostly mystery and romance served up between meals at the Black Butterfly Inn. Although Vernick starts off slow, things get exciting when the relationship between Penny and George heats up and details of an untimely death unfold. 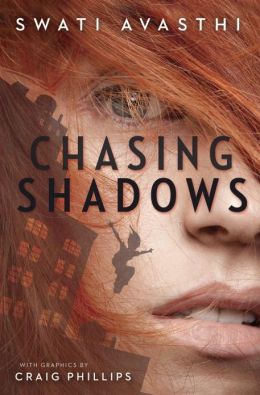 Twins Holly and Corey Paxton have been friends with Savitri Mathur since they were children. Now, at seventeen, Corey and Sav have become soul mates. After a day of climbing buildings and jumping roofs throughout the streets of Chicago, the twins are waiting in their car for Sav, when an act of seemingly random violence occurs. Holly and Corey are shot. Cory dies and Sav and Holly set out to find the shooter. However, unbeknownst to Sav, Holly’s near death experience haunts her and is gradually changing her into someone who could be dangerous.

Avasthi’s dual narrative novel is captivating. The pain of unexplained loss is palpable and the implication on young lives is heart rending. The theme of friendship is addressed in many different and complicated ways through the relationship of the two young women and their connections to Corey. But at the heart of the novel is a story of survival. The graphic illustrations are used to give readers a visual representation of Holly’s experience, trauma, and obsessions. 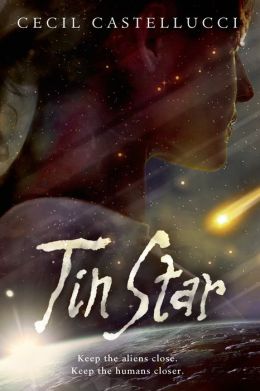 Fourteen-year-old Tula Bane and her human companions must stop at the Yertina Feray space station for supplies. Tula never expected that she would be beaten and left for dead by someone whom she trusts, Brother Blue. Tula is a strong-willed person, unwilling to give up hope, and this is a definite asset as she soon finds herself surrounded by aliens that she believes to be dangerous. With the help of her new alien friend, Heckleck, she manages to heal and plot her revenge. During this process, she meets another alien, Tournour, who falIs in love with her and strives to keep her safe.

Castellucci creates an easy to read science fiction page-turner that will draw reluctant readers in quickly. Additionally, readers will immediately crave a sequel, wanting to know whether Tula will succeed in her revenge and return the love of Tournour. Readers who enjoy stories about space exploration and who relish the idea of sharing the universe with alien beings will want to read Tin Star. 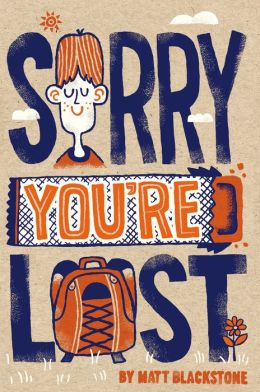 Seventh-grader Denny “Donuts” Murphy’s beloved mother has died from cancer, and he and his dad are struggling mightily, and independently, with the loss. Denny acts out in class, plays pranks on classmates, and doesn’t bother with homework. His best friend Manny, however, intends to distract him from his troubles with a scheme to make lots of money by selling candy at school. Manny, though, has ulterior motives: other students believe they’re contributing to a cause when Manny’s real plan is to bribe some eighth grade girls to go to a school dance with them. Even as Denny’s life is in a downward spiral, there are bright spots in the form of teachers who care and Sabrina, his partner for an English project.

Author and English teacher Matt Blackstone has created memorable characters and a story that deftly weaves humor, pathos, honesty, and courage. Readers, especially male middle schoolers, will appreciate Denny’s antics as class clown, cheer his getting the better of a hallway bully, cringe at the exchange he and his father have at a teacher conference, and delight in a final scene at the school dance. How can you not connect to a protagonist who calls his teachers the “gods and goddesses” of their subject areas? 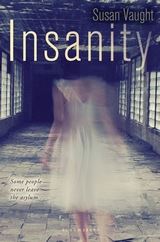 Four teenagers’ lives intertwine inside a psychiatric hospital in this horror/mystery. Forest works in the geriatric ward of the Lincoln Psychiatric Hospital, saving as much of her meager wages as possible in hopes of attending college. Forest has heard strange rumors of ghost sightings for years, but did not think much of them until a man in a photograph turned to look at her. After Darius’ grandmother dies at the Lincoln Psychiatric Hospital, his mother is surprised that Darius chooses to work at that very hospital. Darius begins to doubt his job decision when he hears the same song that his dead father’s ice cream truck played coming from a giant hole in the ground near one of the buildings at the hospital. Trina is Darius’s girlfriend, and her father is a preacher who kills anyone who has special powers, believing they are evil. Trina’s stepmother teaches Trina how to be a witch. Levi is a violent character who uses his frightening powers to scare the patients at Lincoln Psychiatric Hospital. His vicious tendencies change when he meets Forest. As the characters’ lives entwine, their connections, and their connections with the hospital and their ancestors are revealed.

Vaught creates a tangled web that appeals to many readers, not just horror fans. Insanity is filled with constant mystery that keeps readers engrossed in the action. The ghosts and haunts combined with mysterious footsteps and screams from down the hall make for a memorable read. 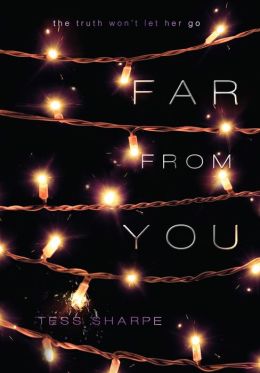 For her debut novel, Tess Harper has penned a page-turner. Told in alternating “now” and “then” chapters, the story centers around Sophie Winters, who we learn in the first lines of the book has nearly died twice: once in a car accident when she was fourteen, and once three years later when she and her best friend Mina were attacked by an unidentified masked man. Sophie narrates the story in which she struggles to get her family and friends to believe that she has kicked her addiction to narcotics, an issue that has led everyone, except her favorite aunt, to distrust her version of her encounter with the masked man. An encounter that left Mina dead.

Unable to convince her family or the police that she was not trying to buy drugs the night Mina was murdered, Sophie sets out to solve the mystery of her friend’s death herself. Readers will root for Sophie as she searches for the truth and will enjoy the suspenseful storytelling in the novel. Harper is able to capture the reader’s attention from the first page of this well-crafted first book.